In response to my last post which includes a photo of an embarrassing poster by the Land Transport Authority (LTA), a reader posted this comment in a vigorous but futile attempt to defend LTA's indefensible blunder: 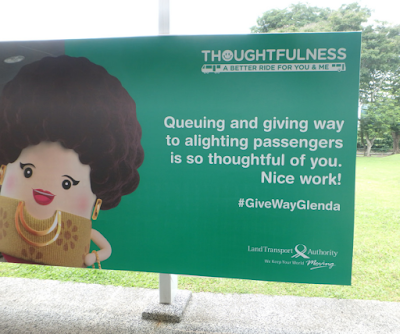 In my previous post, I did not go on to explain why I called this poster a piece of illiterate monstrosity because I thought the mistake would have been obvious to anybody who could read an English webpage. But after having read the reader's comment, I realised that it was presumptuous of me to assume that all my readers knew what the error was. Not only was the reader unable to see the glaring error made on the LTA poster, he was also barking up the wrong tree when he explained why the singular verb was not wrong. The issue of concord did not even cross my mind when I first took this photo of the LTA poster. The sentence is still wrong if we reduce it to 'Queuing is so thoughtful of you.' Concord is not an issue here.

What makes the sentence ungrammatical is its utter meaninglessness. Since the copulative verb links the subject and the subject complement, the introduction of an unrelated clause in lieu of the subject complement renders the sentence an absurdity that has no meaning. One cannot ignore the grammatical function of the copula, The addition of a prop or dummy subject is of course one possibility that is available to a writer in a sea of possible variations.

It is no excuse for the writer to say that he needed to be brief. He could have been equally brief if he had written one of these:

or countless other variations which observe basic grammar rules.

I hope the above is clear to my readers. I hope too that my readers can now see how much space I need just to explain an error that is so basic that no reasonable English-speaking person is likely to make. I cast no aspersion on the reader who made the above comment; I am really quite grateful to him for his comment. I was of course wrong to assume that all my readers share the same linguistic background with me. But at the same time, it would be impossible to blog about language if I have to explain why every single obvious grammatical error is an error. A balance has to be struck and while I mustn't be too presumptuous about my readers' knowledge and proficiency, credit must also be given to the majority of readers who do know their grammar and these readers will most certainly find a detailed explanation for every error needlessly tedious. I say this because I once saw on social media a comment by a stranger about a different blog post of mine in which I highlighted a grammatical error that was so glaring that I was fairly certain no right-thinking person (not even a child) would have made it. The stranger wrote, quite unkindly, that I was 'too arrogant' to explain why the sentence was wrong.
Posted by TL at 11:06 PM