Singapore has the finest education system in the world and its students have shown themselves to be perfectly capable of winning the world's top academic awards such as the various International Olympiad competitions.  But there is one huge shortcoming that has yet to be addressed - our educators' shocking deficiencies particularly in language teaching.

I have written many posts in this blog about the many outrageous mistakes made by the Speak Good English Movement including the two books that were published in their name. Click here for a list of the posts and their links.

I don't really care if the average person or the man on the Changi omnibus makes dozens of grammatical mistakes in his speech and writing. It is enough for me if what a person says or writes is reasonably comprehensible to me or to the person with whom he is communicating. To demand more from the average speaker or writer is to be superciliously pedantic. But what I cannot tolerate are people who make it a point to correct someone of a perceived grammatical error especially when that person has made no error and it's the eager fault-finder who is wrong. It's much more unbearable if, as it frequently happens, the captious but erroneous critic happens to be an educator in Singapore.

Not long ago, I wrote two posts in this blog to expose the blunders of the Consultant to the Speak Good English Movement who is also the Vice-Dean of the School of Arts and Social Sciences in the Singapore Institute of Management University (SIM) and who goes by the intriguing German-Hokkien name of Ludwig Tan:

In this post, I explain that Ludwig Tan is wrong to say that Seow Tein Hee, a Straits Times journalist wrote non-standard Singlish when in fact all grammar books support Seow's use of "will" in that context.

A friend of mine (who is himself a full Professor in NUS) reminded me that Ludwig Tan was a graduate of a polytechnic in Singapore who did a BA in Lancaster University and his only claim on Cambridge is a PhD thesis on some aspects of colloquial Singlish (and "surely the Brits don't know Singlish any better?") but I don't think it's right to pooh-pooh Ludwig Tan's academic record in this way. Even if I am to concede that Ludwig Tan's credentials aren't really a glorious example of scholastic brilliance and SIM isn't anywhere near NUS and can hardly be looked upon as the kind of great academic institution that top students would aspire to enrol in, it doesn't alter one bit the thrust of my argument. Whether it's only SIM or Kandang Kerbau Secondary School, I would expect its teachers and certainly the Vice Dean of SIM's School of Arts and Social Sciences to be more careful in checking a simple dictionary even if they may not have sufficient knowledge of the subject.

What I find irritating about some Singaporean educators is their tendency to insist that perfectly grammatical sentences are non-standard Singlish. They seem to be on the alert for any usage that they are not familiar with and they will denounce it as Singlish. Usually, their lack of familiarity with the usage has more to do with their own deficiency in reading than the rarity of such a usage.

I don't know if you have noticed this but I have seen many times in Singapore's language teachers particularly those in our primary and secondary schools this strange inability to do something simple such as look up a point of grammar in a grammar book. But grammar books can be confusing for those who are not familiar with them and so I can readily pardon a primary school teacher who is unable to do that. What I find totally unacceptable is their inexplicable incompetence when it comes to doing a simple thing like looking up a word in the dictionary. Surely even a fool can do that?

Shortly after I posted this in my blog, Ludwig Tan amended his post on "departmental store" by adding a final paragraph to his post. 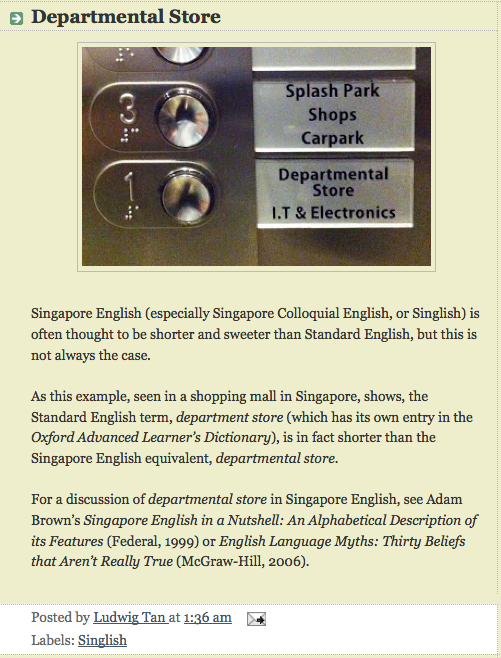 That's all it says and not a syllable more. Who, you might ask, is Adam Brown? The back cover of the book says "Adam Brown is an Associate Professor in the School of Arts of the National Institute of Education, Nanyang Technological University." What illustrious credentials has this Adam Brown got that would make his assertion trump the clear words of the OED?  Nothing. Any grammarian or language teacher must know that the OED or the Oxford English Dictionary is the final arbiter of the language. The words of a teacher from Singapore's National Institute of Education (even though he presumably teaches all our budding language teachers) mean nothing if the distinguished lexicographers of the OED say something totally different.  When you are told that the OED accepts a word as a standard English word, you do not obstinately insist that a teacher from Singapore's National Institute of Education says otherwise and so the OED must be mistaken. It's just so wrong that even a child must know this.

After posting my two articles on Ludwig Tan's errors, I thought I would have nothing further to say about him. But just last night, I stumbled upon yet another bloomer from him. 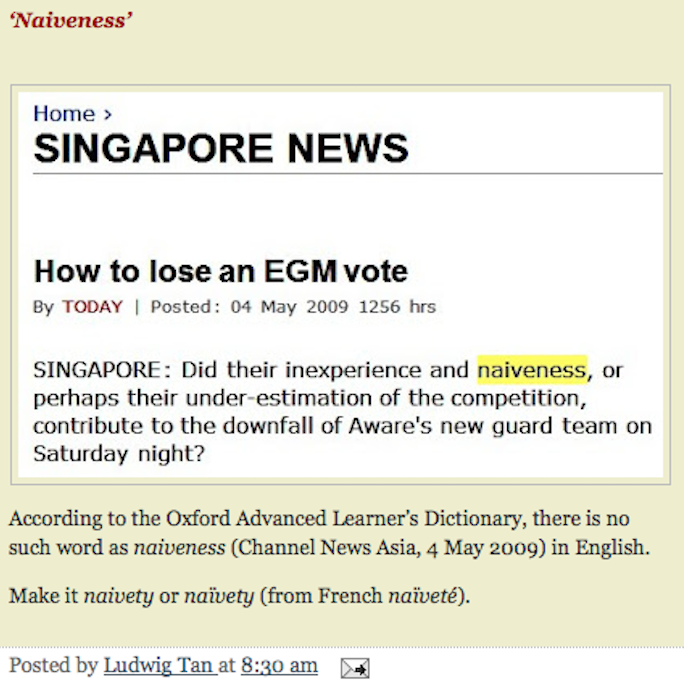 If there is one thing I really can't tolerate, it's this tendency of Singapore's educators to be on a constant lookout for errors even when there are none. Of course "naivety" is a more common word but even if you don't read much and would baulk at "naiveness", surely the decent thing to do before you pontificate from your high pulpit that "there is no such word as naiveness",  is to look up a reliable dictionary?

It's to help learners who need to expand their vocabulary to 7500 words. It's not a comprehensive dictionary that TEACHERS of the English language should be using. The dictionary has no entries for words that are rare or not so commonly used. It's a limited dictionary designed for students to improve their limited vocabulary. It's certainly not a dictionary that you should use to declare to the world that there is no such word as "naiveness". If Ludwig Tan had merely used the Concise Oxford English Dictionary, he would have known that there is an entry for "naiveness" in the dictionary. Of course "naiveness" is more rarely used but it is an English word accepted by the OED.

Singapore's educators must really pull up their socks. We do so well in all the other academic disciplines. It's high time we did something about our English language teaching.
Posted by TL at 10:18 AM