So far, I've been slamming grammar terrorists who aren't all that competent in English grammar and usage. They may be teaching the English language to students and they may choose to style themselves English language experts or specialists but from what they have written (and as you can see from what I have carefully documented in the numerous posts in this blog), one can't really consider them competent in the language in any sense of the word. Most of them don't even know the rudiments of English grammar. I define a grammar terrorist (and it doesn't bother me how other people might have used the term) as someone who seeks to tell others they are grammatically wrong when he himself is incorrect.

As I have said before, most grammar terrorists are people who know precious little about grammar. Sometimes, a grammar terrorist has an impression that a sentence or phrase is wrong. It may be that he vaguely recalls being told that it was wrong but he can't now remember the details. That he proceeds to denounce the sentence or phrase as wrong without first checking if he is right is what really irritates me.

But there are all kinds of grammar terrorists.  I recently discovered a blog written by someone who is a Vice-Dean in one of our new universities that seem to be sprouting up like mushrooms. From my reading of his blog and elsewhere on the internet, I understand that he did a PhD dissertation in Cambridge on some aspect of Singapore colloquial English. And for what it's worth, he is also a consultant to the Speak Good English Movement. Naturally, one would expect him to be more careful in denouncing local writing as non-Standard especially when it is not.

In one of his blog posts, he comments on an excerpt from the Straits Times. Here is the excerpt followed by his comment. 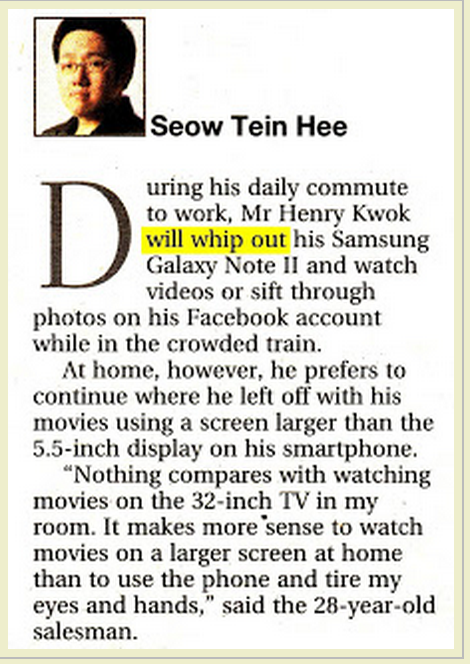 What utter nonsense! I was tempted to title this post "What They Don't Teach You in Cambridge Linguistics School" after the famous management book "What They Don't Teach You in Harvard Business School" but I decided that wouldn't be fair to Cambridge. The writer did his PhD dissertation in Cambridge but his only other degree is from Lancaster University. I always try to be as factual as I can in my blog.

But never mind where he got his BA from. I would have thought a student with a BA in English Language from any university would at least know how to look up books on grammar and usage even if he is unable to remember some of the things he has been taught.

When I first read his comment on the Straits Times excerpt, I was rather surprised. I checked the credentials of the blogger again just to be sure that my eyes didn't deceive me the first time I read them. I thought everyone knew perfectly well that "will" could be used for habitual events. How on earth can this consultant to the Speak Good English Movement be so wrong in basic grammar?

It is amusing that he was so sure that the use of "will" to express habits is a feature of Singapore English.  He goes on to suggest that it's probably an influence from Chinese. But as I have said earlier, his PhD dissertation in Cambridge was on an aspect of Singapore colloquial English so I doubt very much if you will believe me when I say he's wrong. You probably think he should know what constitutes Singapore English and he's probably right and I'm wrong.  The onus is on me to show he's wrong and what better way to do that than to refer to a grammar book? I will quote from two grammar books just so I can assure you that I'm right and he's dead wrong.

In the Oxford Guide to English Grammar under the title "Habits: will, would and used to", it says this:


We can use these verbs for habits, actions which are repeated again and again. We use will for present habits and would for past habits.

Among the examples given in the book is this.


Every day Jane will come home from school and ring up the friends she's just been talking to.

The Oxford Guide goes on to say:


The meaning is almost the same as a simple tense: Every day Jane comes home...

The book continues to say further:


But we use will as a kind of prediction. The action is so typical and happens so regularly that we can predict it will continue.

The second book I will refer to is A Comprehensive Grammar of the English Language by Quirk and others which I don't like to take down from my shelf because it's such a large and heavy book. Under the title "Will/would", it says that the habitual predictive meaning of will occurs "in descriptions of personal habits or characteristic behaviour". The book then gives various examples but I'll just pick one of them:


She'll sit on the floor quietly all day. She'll just play with her toys and you won't hear a murmur from her. [of a good baby]

But really, when you think about it, this is precisely what all of us who are competent English speakers would naturally say or write. Even without thinking about it, we wouldn't dream of saying that the Straits Times used "will" in a way that is non-Standard Singapore English. That's because those of us who are used to the general feel of the English language somehow can tell if something is right or wrong.

What this consultant to the Speak Good English Movement does is pernicious. He will ruin the confidence of the average person who probably thinks the blogger is right.

Grammar terrorists who tell us we are wrong when we are not are effectively hampering our creativity! The English language is beautiful in that it allows for so many different ways in which we can express a thought, more so than in any other languages. It's very annoying when grammar terrorists tell us that we are wrong when we are not, simply because they assume without any justification that any variation of an expression they are accustomed to must necessarily be non-Standard and a feature of Singapore English.

I have not finished with this consultant to the Speak Good English Movement and Vice-Dean of the School of Arts and Social Sciences in one of our new universities. Keep an eye on this blog for the next post and if you have been following my blog, you know you haven't got long to wait.

For a list of my blog posts on grammar terrorists, click on this. Please note that this list of grammar terrorists will be updated every time I publish a fresh post in my blog on the subject.
Posted by TL at 11:32 PM